Aimed at the young ones, the piece fluctuates quite well through all ages, resonating relevant questions on norms, gender and prejudice.

Basel based Compagnie Tabea Martin performed the first of three runs of their new production for children “Geh nicht in den Wald, im Wald ist der Wald” at the Tanzhaus NRW in Düsseldorf. Although choreographer Tabea Martin aims at the young ones, the piece fluctuates quite well through all ages, resonating relevant questions on norms, gender and prejudice.

The piece begins with a list of rules, which are - unintentionally - instantly broken as the dancers demonstrate them. There is a clear child-like story telling, hinting up to fables and fairy tales with princesses, princes and monsters in the dark forest - which you are told not to go into, but that only makes you want to go in even more. The fairy tale ends without a happy ending. Instead a new story begins, and a new one, and a new one … Each one of them narrates plots fueled by the fear of the unknown, leading to exclusion, which then results in violent responses.

What is interesting to see is the constant shift of roles, reflecting on how in life the victim of exclusion is ever changing. Martin points out to the large variety of ways in which humans discriminate others and how situation-based the discrimination comes to be. There is no rule. And even if there were, the very first scene of the piece has already established that rules are to be broken.

The five performers - four dancers and one musician - are constantly changing. They change characters, clothes, gender, language. They go from singing, to speaking, to yelling, to running, to dancing. And their movements are at times aggressive and at others so gentle. They spit, they kiss, they love and they hate. Martin explores a vast range of human emotions in a magnificent way, interluding scenes of melancholia with those of great humor, stealing loud laughs from the entire audience.

All the scenes progress into conflict and the pointing of fingers. Who did it? You did it! They might not even know what “it” is, but one has got to be the culprit. You, he, she, they. Can anyone identify as we? Is there a we without a them? And why do we need to hate them? Will we always choose to take our utopia goggles off and look for a crass detail to bring us apart? These questions linger in your mind long after watching the performance. It is one of those stage moments a child will likely remember twenty years from now. Martin is extremely successful in developing the urgent issue of discrimination in a graspable way for children, and in a thought provoking and amusing sense for all.

“Geh nicht in den Wald, im Wald ist der Wald” is geared with several eye catching elements: All the clothes hanging from the racks on both sides of the stage, the four changing cabins in the middle of the space, the black board, and so on. One of the highlights of the performance is how music is incorporated in it. Not only is the musician playing on the stage, using what appears to be self made instruments combining several functions, the music he makes is more than a mere soundtrack, but one of the many tools Martin uses for storytelling. The piece is a brilliant mixture of beautifully executed dance, engaging theater and striking music making. 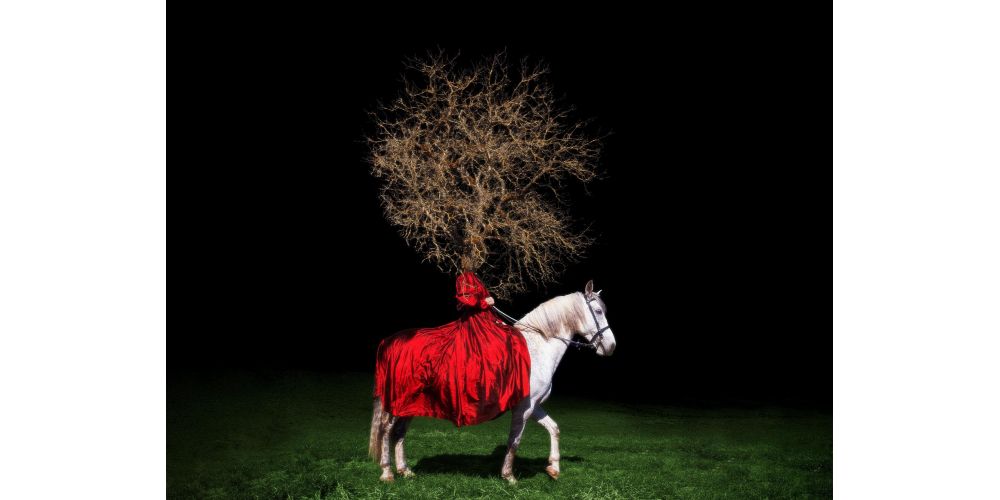